Jeremy says that adapting as time goes by is key, as is following through with the plans carefully laid out by his predecessors. 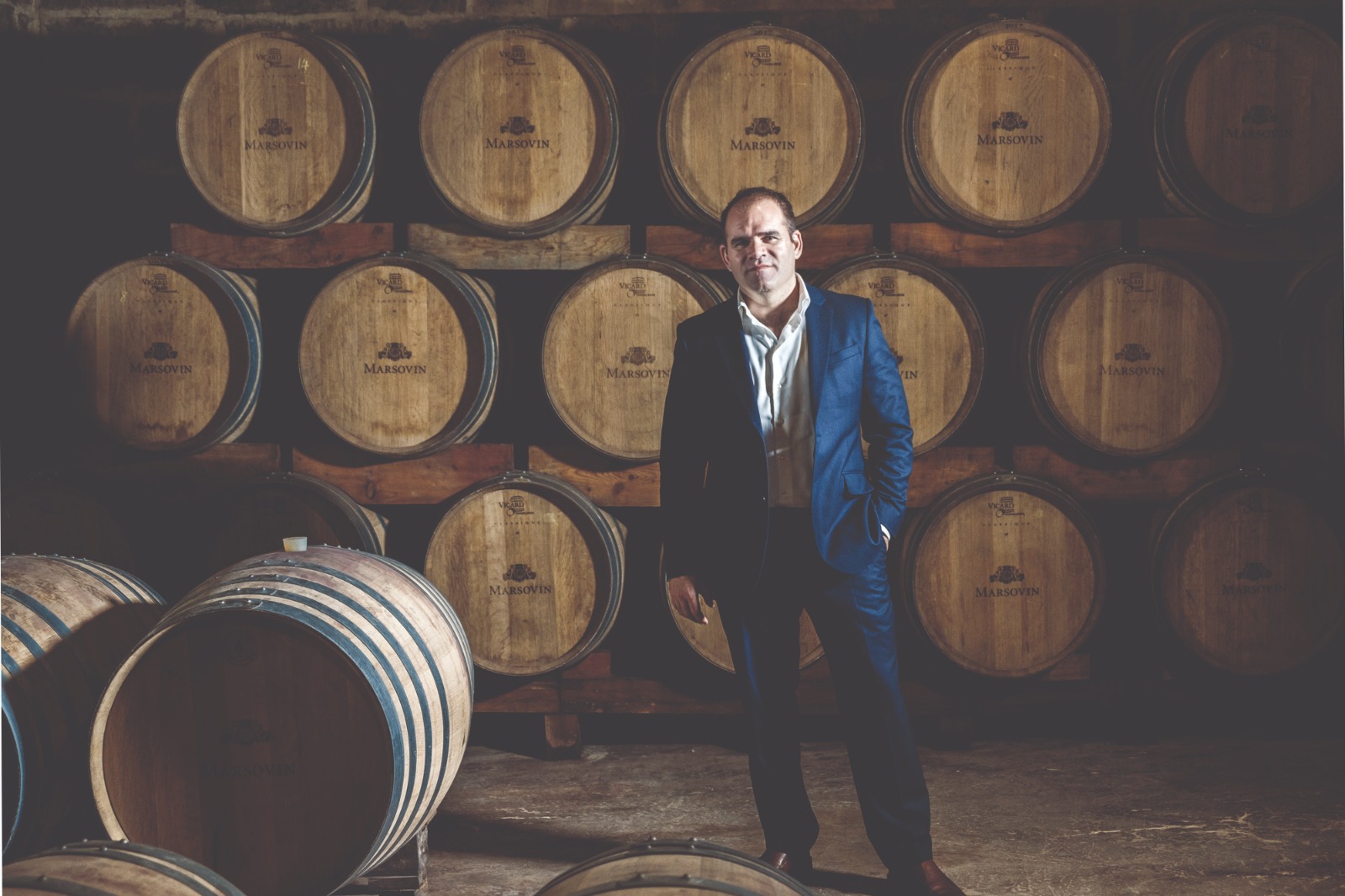 Regardless of your personal fondness for wine, if you’re a local, you’re bound to have heard of Marsovin. A household name that’s become synonymous with the production of premium wines on the island, it boasts a strong legacy that dates back to 1919, when enterprising local Anthony Cassar decided to set up a wine merchant business with his brother George.

It was in the 1930s, however, that Anthony would part ways with his brother, creating Anthony Cassar & Son, and together with his son Joe, began to set the business on the trajectory that would go on to make it a household name. As a result, Marsovin was incorporated in 1956 as a family-run company, which would grow to play a significant role within the history of winemaking in Malta.

“My great grandfather started with close to nothing,” says Jeremy Cassar in the latest edition of Business Now. Jeremy makes up the fourth generation in the family to head Marsovin. At the outset, he describes the circumstances as very different to what they are today, within an environment that wasn’t easy.

“World War I had just ended, and he didn’t come from money. They’re humble beginnings, of someone who had courage and determination, and worked very hard. During World War II, those who knew him always described him as being blind to danger, still delivering wine across the island, even while it was being bombed. It was his frame of mind, within a very different context,” explains Jeremy, with reverence.

He likens this to any major challenge businesses have had to face over the years, bringing it to bear on the latest one for many – the COVID-19 pandemic. “Today, we have initiatives like the Wage Supplement, for example, to help us overcome such a challenge. It was a very different time, back then,” he maintains.

Luckily, after Anthony’s initial trailblazing years, the transition of the business to the second generation, his son Joe, was an easy one. “Anthony was a very proud father, and considered his son to be God sent,” smiles Jeremy, describing his grandfather Joe as a bright young man who would continue to strengthen the business. “With family businesses, it is not always the case, but in this particular case, from what I have been told, it was a very obvious transition, and one he was very happy to make.”

Yet one milestone that Jeremy considers having changed the course of Marsovin in perhaps the most substantial way, happened in his own father’s time – that is, the third generation.

Combining the entrepreneurial spirit of his grandfather and the modernising aspect of his father, Tony Cassar would see Marsovin invest in five estates around Malta and Gozo, specifically intended and selected for premium winemaking.

“Up until the 1970s, Malta had more of a beer-drinking culture, due to the British influence,” Jeremy explains, affirming that today, premium wines are sold more frequently. “I think the biggest transition, that stepped up the quality in a big way, was when my father invested in our cellars and vineyards, starting in 1992, all the way through to 2005. Each one was chosen specifically for the types of wine we wanted to produce.”

“If you want to say that you’re a quality wine producer, you need to have access to your own vineyards, so as to manage the quality from beginning to end. We weren’t doing that before, and it wasn’t something which was believed in locally,” he continues, maintaining that having your own vineyards sets you apart. “That was really important as a wine producer.”

Another major milestone for Marsovin, according to Jeremy, was overcoming Malta’s EU accession. “That was not easy for all operators on the island – but it was a question of adapting, and today, the market is more quality-oriented and we are happy to continue down that road,” he affirms, highlighting the company’s continued emphasis on raising the bar on quality.

Looking back on his family legacy, Jeremy reveals that growing up, “Marsovin was everywhere”, joking that as a child coming from a family with a wellknown business, wherever he went, he’d come across it. Still, he laughs, having an endless supply of drinks at home was great, “and as I got older, we had an endless supply of wine too, so certainly from an entertainment perspective it was good!”

On a more serious note, Jeremy says that he always admired what his father did, and the way he did it, and while “the business and the family were like one thing”, his decision to join Marsovin was not an automatic one. “I went to live in France when I was 21, and spent a year and a half working and studying there. It was there that I fell in love with the culture of wine,” he explains, referencing the importance of having that culture, which also happens to be the company’s slogan.

“The culture of wine is really important… without it, it becomes a business like any other. It’s got to be in you to do a good job. In fact, whenever we look for people to join the winery, within whatever role it may be, we try as much as possible to choose people that are also engaged in the business; to have some sort of link – either a passion for wine or a willingness to learn,” Jeremy continues. “I have fond memories of my father and grandfather working in the business as I was growing up – everybody was always very passionately involved in the business, and it was something that as a child, made you feel very attached and proud of it.”

Speaking of his own experience at the helm, Jeremy says that adapting as time goes by is key, as is following through with the plans carefully laid out by his predecessors.

“Once you have a business that is established and which has taken a certain path, particularly with a long-term business, your main responsibility is to stick to the plan – one which was set out from the late 70s to the early 90s in our case, that of having estates around the island and producing quality wines from them – I have a responsibility to manage the estates and continue to improve on them,” he shares.

Apart from that, of course, he has his own stake in the family legacy, and has his sights set on the next project: building a boutique winery within one of Marsovin’s vineyards, which he envisions to be a reference point, both in terms of design and quality standards moving forward. “This should happen over the next two years. I’m hoping that it will be the next milestone,” he smiles.

Speaking of how the landscape in the industry has changed, Jeremy reveals that it has become more competitive and saturated, and the only way to deal with that is to continuously strive to lead the way. “I believe in innovation. Within the wine business, there are limits to innovation,” he acknowledges, but feels that you can innovate in different areas, including the wine styles produced. “We are the only ones on the island to make wine in the noble méthode traditionelle for sparkling wine, for example. We’ve been doing that since the late 90s, and we’re very proud of it. In the grand scheme of things, these details may seem small, but they are what make us stand out.”

Meanwhile, Jeremy feels that Marsovin’s strong legacy also plays a part in making it a frontrunner in the sector, coupled with the capable team of people that run it every day.

“We have six qualified viticulturists and winemakers, and a mix of local and foreign staff that work hard to constantly improve our standards. You can dream of having good wine, but if you haven’t got the team to do it, it’s very hard. We have the team to do it. The heritage is nice to have, but it’s in the past. The future is in the hands of the people doing the job, and that is our strength. It’s a team that is unique on the island – we have a lot of work that is still left to be done, to constantly improve and raise the bar,” he maintains, adding that nowadays, the team is no longer only contending with other local wineries, but with wines from around the world, so the quality has to be on par or better than the average wine of similar value, from wherever it may originate.

“We always try to deliver on our promises, pushing the bar on quality, and trying to always raise the level, year after year,” he says, affirming that it’s about pushing the standards and maintaining them, which is critical. “We have a commitment towards Maltese farmers and viticulturalists. We work with over 220 farmers every year – we are very loyal towards them, and they are the same towards us. Agriculture is so important to the island, and it is not given as much importance as it should be,” Jeremy continues, appealing to locals to have a greater appreciation for what Malta produces from its own land.

“Even if it costs a bit more, it’s worth buying local. From a carbon emissions perspective, it’s better to buy from a local supplier than getting it from halfway across the world. It’s important for people to recognise when a quality product is produced in Malta,” he notes, referencing a belief that locals tend to undervalue locally produced products.

As for his plans for Marsovin moving forward, Jeremy says that while the immediate objective is to have more of a physical presence within their vineyards with a winery, for the long run it is to further establish the company’s name as a leading wine producer, and to do more with it.

“We do enough for what there is today but being a premium wine producer by today’s standards is only enough for today. What’s it going to take in 20 years’ time? If one takes a graph to chart the quality since 1919, it’s only gone up, and it’s going to continue. And because of that, everything you do also has got to continue going up,” he concludes.

This has been adapted from a feature carried in the latest edition of Business Now.

Read next: ‘What a crazy journey’ – FreeHour’s Matt Fenech promoted to Head of Sales