The Time100 Next list singles out 100 individuals from around the globe who, through their work, advocate for a better tomorrow. 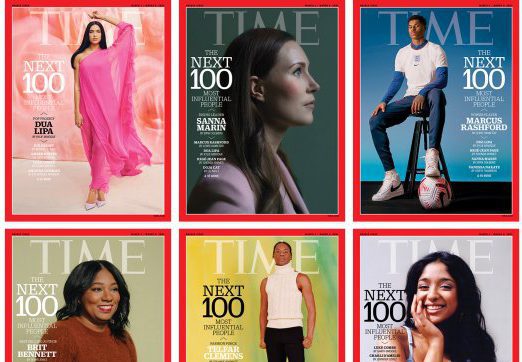 Mehta is the 34-year old founder and CEO of Instacart, a US company that operates a grocery delivery and pick-up service, whose business boomed during the pandemic. The company raised more than $500 million in venture-capital funding in 2020, and the CEO’s mission is help make the smartphone “the supermarket of the future.”

Since 2016, Raga has been CEO of social shopping app Depop, where users buy and sell second-hand clothing. She helped create a community of sustainability among the app’s 26 million users, while also fostering a feeling that luxury items can be accessed by all.

A computer scientist and entrepreneur, Harris has been warning about the dangers of the world’s major internet platforms for the better part of a decade. A former Google employee, he co-founded the Center for Humane Technology in 2018, a non-­profit focusing on tech addiction and how technology can be used to manipulate human behavior.

The Liberian-American fashion designer has a mission to create clothes that are accessible to everyone through his line of genderless fashion. Since 2005, his unisex designs have been encapsulated by the brand’s slogan: “It’s not for you, it’s for everyone”.

Flutterwave, a tech start-up based in San Francisco and Lagos, Nigeria, single-handedly helped some 20,000 small businesses across Africa set up online shops, payment gateways and deliveries during the pandemic after their in-store sales crashed. Agboola, Flutterwave’s co-founder and CEO, called the initiative ‘Keeping the Lights On,’ which went on to make the company Africa’s top payment-solution provider.

Based in Johannesburg, Vally launched a design studio, Counterspace, focused on creating architecture that celebrates the African continent. In 2019, she became the youngest architect ever to receive a commission for London’s 2020/2021 Serpentine Pavillion – one of the industry’s biggest accolades.

An assistant professor of mechanical engineering at the University of Rochester, Dias invented a room-­temperature super­conductor (which need super cold temperatures to work). His breakthrough solution could pave the way for future innovations, including magnetic levitation trains and resistance-­free power lines.

The CEO of ICON is a conservation biologist turned construction technology pioneer, whose company has been funded by NASA to build a 3D printed structure on the moon. In 2020, in his hometown of Austin, he also printed complete, 3D homes for low-income families.

Chef Omar Tate made headlines over the years with his upscale pop-up called Honeysuckle that celebrates the African American food experience. Throughout the pandemic, he turned to the culinary ways of his ancestors, preparing food for those in need, before establishing his first official eatery in the form of a community centre in Philadelphia.

Through his non-profit, Upsolve, Pavuluri created a free online tool to help users in financial distress file for bankruptcy on their own. Against the backdrop of COVID-19, Upsolve has helped American users relieve more than $300 million in debt, a tool he describes as “a way to use technology to address a civil rights injustice at scale.”