Mizzi Studio designed the landmark Serpentine Coffee House and a family of nine kiosks for prominent locations within The Royal Parks, London. 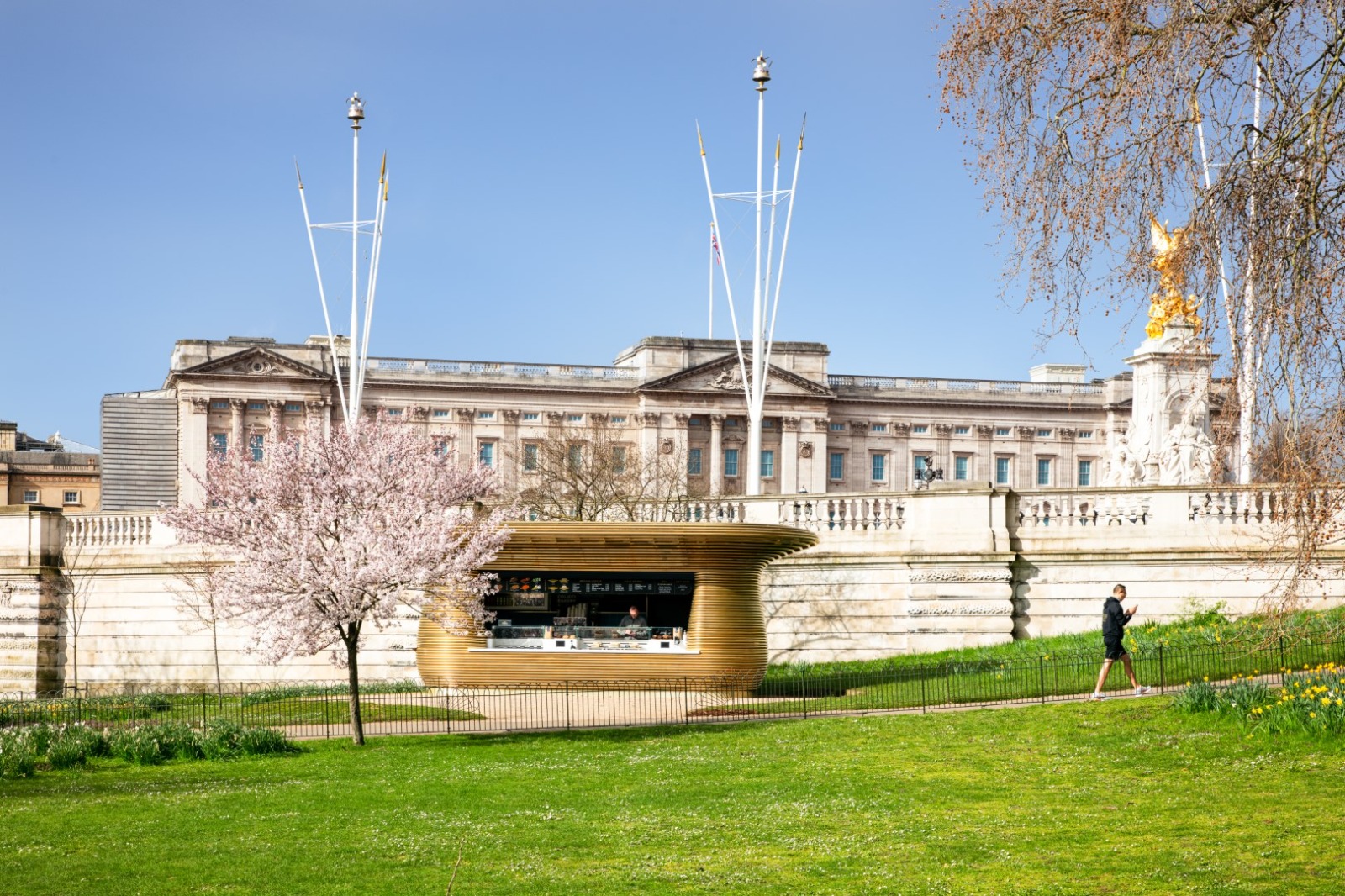 “The Horseshoe Bend Kiosk marks the conclusion of our studio’s most significant commission in London to-date. But more importantly, it signals a new chapter for Londoners and visitors alike – a chapter of hope and belonging,” says Director and Founder of Mizzi Studio Jonathan Mizzi, on the occasion of the installation of a brass tubular kiosk at the foot of Buckingham Palace – the last of nine different handcrafted kiosks replacing ageing refreshment kiosks across The Royal Parks.

In the summer of 2017, on behalf of artisan brand Colicci, Mizzi Studio designed the landmark Serpentine Coffee House and a family of nine kiosks for prominent locations within The Royal Parks, London. The kiosks’ installation roll-out began in October 2018, with the final kiosk erected on site at St James’s Park this month.

“We believe public architecture can restore mental well-being, bring people together, and we are grateful to Colicci and The Royal Parks for allowing us the opportunity to offer a network of nature-inspired landmarks that people can turn to, enjoy, and unite amongst,” he continued, speaking of the project.

Responding to the Grade I listed landscape, Mizzi Studio designed each kiosk to sit sympathetically in its environment. The most recently erected structure, the flagship Horseshoe Bend kiosk in St James’s Park, is clad in tubular brass and mirrors the ornate precious metals of the nearby Sir Thomas Brock’s Queen Victoria Memorial.

The freestanding kiosks are conceived as a family of individual curvaceous structures with a graceful tree-like canopy that unites their design language, with each design variation being informed by the architectural or organic elements that the kiosk shares its space with. To achieve this, the Director of Mizzi Studio spent months exploring the parks’ heritage, together with Colicci’s Director Rob Colicci.

Mizzi Studio has collaborated with Colicci on a number of projects over the years, including the multi award-winning copper café at London’s Westfield Stratford shopping centre and The Pheasantry Café within Grade I Listed Bushy Park. Their joint body of work has had a strong focus on craftsmanship, a connection with nature, and creating memorable sculptural moments.

“The installation of the final Horseshoe Bend Kiosk marks a significant moment for the Colicci brand, as well as our longstanding relationship with Mizzi Studio,” said Colicci Director, Rob Colicci.

“The Royal Parks hold a special place in the hearts of city dwellers and people who visit the capital from near and far. The richness of the brass kiosk echoes Colicci’s dedication to quality food and drink and highlights our belief in the relationship between excellence in design and service – each positively reinforcing one another. We look forward to seeing the kiosks being enjoyed by park-goers once again come the summer months, uniting families through their warmth and magnetism,” he continued.

Commenting on the partnership with Mizzi Studio and Colicci, Andrew Varnava, Head of Catering Contracts at The Royal Parks, said, “it has been an amazing journey with Colicci and Mizzi Studios through the various stages of concept and design meetings, installation and finally seeing the new fleet of kiosks in use.  Working collaboratively, we have been able to achieve the installation of these fantastic kiosks, designed to be in keeping with the parks’ natural environment, and we now boast an expanded and impressive range of high-quality food and drink for the thousands of visitors who come to our parks every day. The Mizzi and Colicci teams have been a pleasure to work with.”

Read next: HSBC CEO to shift to hot desking as the bank repurposes executive floor in London HQ