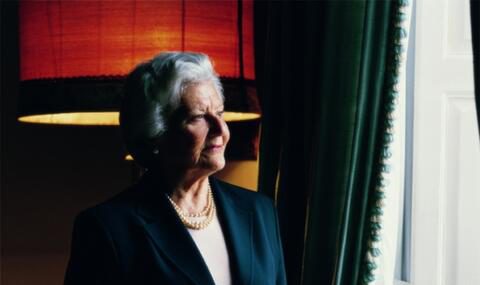 Drawing on a quote from Mother Teresa, Ms Taylor-East said that Ms Miceli Farrugia’s work was driven by “heart to love, hands to serve”.

“Her meaningful life comes to an end,” she shared, before adding that she was devoted to her mission motivated by “dignity, integrity, and the love of others”.

“All ingredients that make her the symbol of doing and giving for the benefit of others,” Ms Taylor-East continued.

SOS Malta was founded in 1991, at which time Ms Miceli Farrugia became a member and also served as its first Chairperson. The organisation was established to address the hunger and poverty-stricken Albanians that reached Malta during the early nineties, including the provision of humanitarian aid and emergency food supplies. It has since grown to become a development agency providing long-term social, economic, and political development for the people of Albania.

Ms Taylor-East remarked that it was a “privilege” to work with Ms Miceli Farrugia for “so many years”, including their efforts to “alleviate the suffering of the most vulnerable” in Albania and Kosovo, where they “experienced what real poverty meant”.

“Spread your wings and fly proudly. Your memories shall live on,” she concluded.

“Lilian was a model of love, compassion, and generosity. Her mission in life was one that made a difference in the lives of so many people,” the NGO shared.

“SOS Malta is grateful for her leadership for truth and justice. Your legacy within the organisation will live on,” it added.

The news was also met with a number of people expressing their sadness on social media, with some calling her a “one of a kind” woman, remembering her for her “fondness” and “helpful” nature.

Ms Miceli Farrugia was married to leading Maltese entrepreneur and former Farsons Managing Director Anthony Miceli-Farrugia, and aside from raising their six children, she was also involved in the social and philanthropic activities of her husband’s entrepreneurial ventures.

She was also involved in a number of her own philanthropic pursuits, including being hand-picked by Mother Teresa of Calcutta to lead her co-workers during her first visit to Malta in 1967. She also worked with Mother Teresa to build a school for children with special needs in Albania. In 1999, Ms Miceli Farrugia was voted Malta’s Senior Citizen of the Year.

Read next: ‘Experiences are more valuable than things’ – Joanna Delia