Founder Nazzareno Vassallo has been at the helm of the Group for more than half a century. 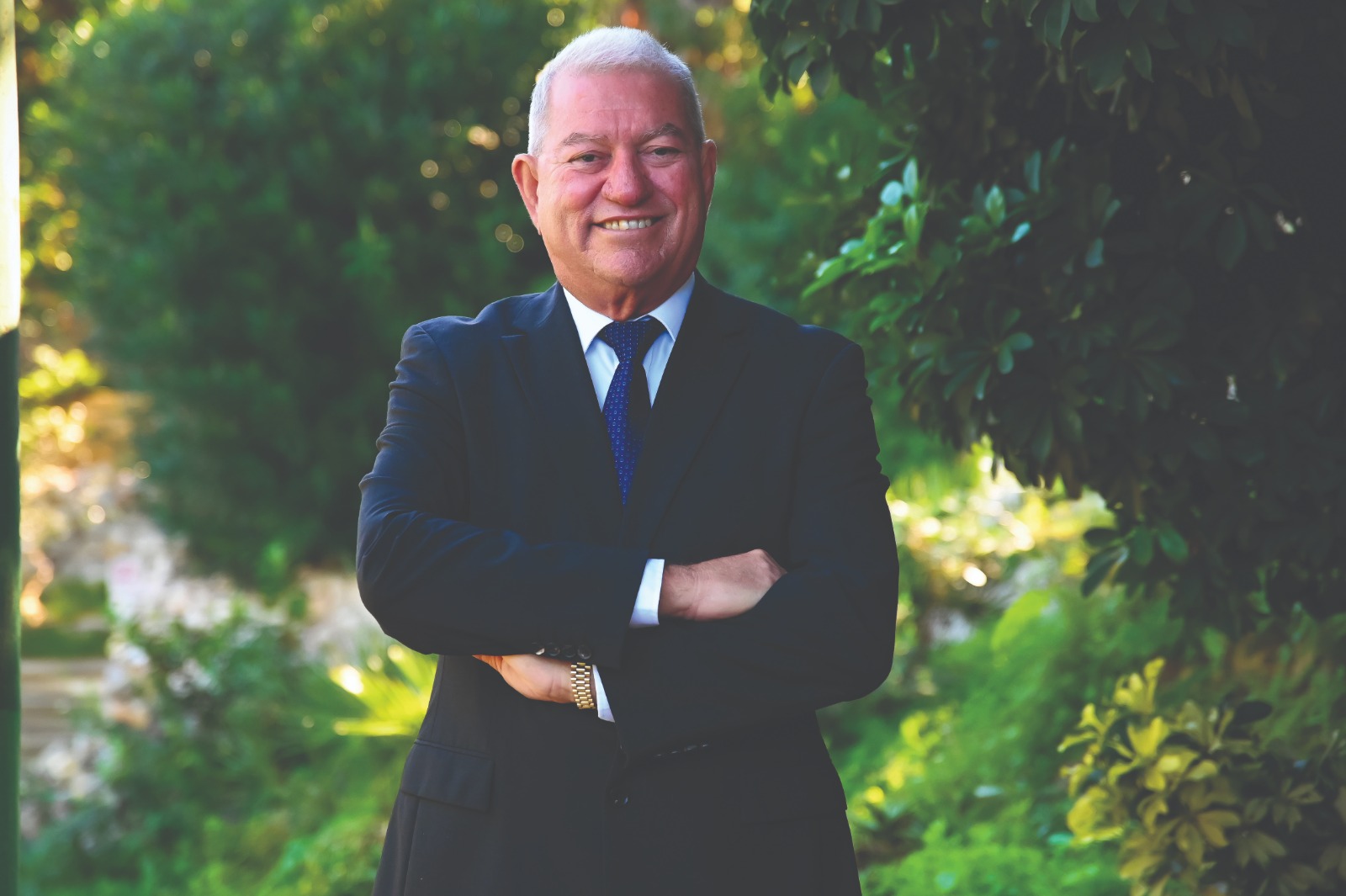 Celebrating its 76th anniversary this year, Vassallo Group today boasts a strong presence in several sectors within the local market, including property and construction, furniture and interiors, elderly and disability, catering, hospitality and education. Yet, while the family-run business has established itself as a household name over the years, its roots – as roots often tend to be – are humble. It all started in 1946, against the backdrop of an island in ruin following World War II. It was then that the late Piju Vassallo formed a partnership with nephews Mikelang and Giuseppe Gatt, with the purpose of clearing out war debris from public buildings.

“There is no doubt that World War II brought a lot of destruction to our islands. The irony is that even such a sad situation can create opportunities, as it did for my father and his nephews,” reflects seasoned entrepreneur and Founder of Vassallo Group Nazzareno Vassallo, who has been at the helm of the Group for more than half a century.

He goes on to explain how his family members swapped farming for clearing war debris, by using their truck to sow the seeds which would eventually flourish to become an established and respected name in the building trade. “It has to be said that although he was venturing into a new area of economic activity, my father still held dear the values and the philosophy of life that always guided the farming community. These values guided my father and his nephews as they contributed to the reconstruction of towns and villages destroyed by war,” Mr Vassallo reveals.

Two decades later, in 1971, Vassallo Builders was born and incorporated as a limited liability company, led by Nazzareno Vassallo. Looking back on some of the major milestones within his early days in the business, Mr Vassallo affirms that the first came about in 1977, when Vassallo Builders won the largest turnkey project in Malta up to that time – The Danish Village in Mellieha.

“This development led to the company’s entry into the tourism industry and to another milestone – the building of holiday flats as well as The Bugibba Holiday Complex in the ‘80s. Then, in 1992, a consortium I headed won and completed the Air Terminal in Gudja,” he continues, listing notable business landmarks.

Another milestone was achieved in the ‘90s through the creation of CareMalta, making Vassallo Group the first private company in Malta to invest in developing a privately owned, purposely built facility for the elderly on the island. “This was a revolutionary step, because since then, private elderly homes have mushroomed in Malta, and have started addressing the endless waiting lists for entry into such homes,” Mr Vassallo explains, noting that the company was the first to partner with Government to run a government home for the elderly through a PPP agreement.

Finally, Mr Vassallo points to yet another milestone, reached in 2009, when the Group began to invest heavily in property for use as offices, retail, as well as residential purposes.

Looking at his business model, it comes as no surprise when the Founder says that diversification is the name of the game. “We never believed one should put all their eggs into one basket. We branched out into a number of sectors which were in line with our ethos, experience and capabilities,” he affirms, pointing out that the Group was able to diversify in particular sectors, such as that of care, by filling gaps which had been empty for many years.

Displaying further examples of this, he continues, “we branched into the disability field by setting up HILA (Home to Independence and Limitless Abilities) and building modern homes for persons with disability. We also supported Bjorn Formosa in his quest to operate a home for people suffering from ALS and other degenerative diseases with the opening of Dar Bjorn, and contributed to the mental health sector by opening Casal Nuovo, which today houses a number of patients who previously resided at Mount Carmel Hospital.”

“Our diversification brought with it a number of advantages,” Mr Vassallo states, referencing the creation of jobs as well as the need for training, which the Group is also fulfilling through its own company, Learning Works. “But perhaps the biggest advantage was that this diversification made us more resilient, and helped us withstand the worst effects of COVID-19, for example, which would not have been possible if we only invested in a single sector, like hospitality.”

Having grown up with Vassallo Group, Mr Vassallo has also collected many fond memories over the years, which, he says, “I will certainly cherish for the rest of my life”. Among these, he lists the Danish Village and all the work that went into it, winning the Air Terminal tender and completing it in record time, as well as the opening of many CareMalta and HILA homes. “With these I have to add many social activities we held as a Group throughout all these years, which gave me the opportunity to spend enjoyable time with our loyal employees,” he continues, adding, “in recent years, events such our annual Shine Awards in which we recognise the efforts, loyalty and service of our employees became an occasion I always look forward to.”

Reflecting on the ways in which the business landscape has changed within the industries Vassallo Group operates in, Mr Vassallo outlines one major difference across the board: increased competition. “This is one reason why we keep insisting on a quality service and loyalty to our clients, both individuals and businesses. We also recognise that our employees are part of the success that we have achieved throughout the years and therefore focus a lot on their welfare, well-being and development,” he explains, revealing that, for this reason, “in a number of sectors where we are involved, we have many employees who have been with us for over 10, 20, 30 or even 40 years!”

Commenting on what it is about Vassallo Group that makes it stand out and continue to be a frontrunner, Mr Vassallo confidently attributes this to the sound structures and solid foundation the Group has built throughout the years. “This includes the way our companies operate, and the boards of directors running the companies comprising family members and non-executive directors from outside the Group. I describe our team as one that is in the ‘Premier League’, because although we set high targets, these targets are consistently achieved or exceeded, despite the challenges. I am very proud of this.”

Mr Vassallo’s own contribution has also not gone unrecognised, earning him the title of Malta’s EY Entrepreneur of the year in 2021, as Vassallo Group celebrated 75 years in business. Sharing his gratitude for the recognition, he commends EY for encouraging the entrepreneurial spirit in Malta as he looks forward to participate in their upcoming event in Monaco, together with the winner of this year’s award Mark Bajada, to whom he conveys his congratulations. “This award was not only a recognition of my contribution to the Group and to the Maltese economy, but also of the work of so many people over a span of many years,” he says with humility.

It also comes at a pivotal point in Mr Vassallo and the Group’s journey, as he transfers the business to the next generation, having announced his stepping down from the role of Chairman last December. In his stead, his daughter Natalie Briffa Farrugia, who is also CEO of CareMalta, has been appointed Chairperson of the Group, and will work together with her brother Pio, who will continue to serve as Group CEO.

Commenting on this step, and his hopes for Vassallo Group moving forward, Mr Vassallo reveals, “although we only announced this development late last year I had been thinking and preparing for this eventuality for many years, so much so that I had ensured that all my children got involved in different areas of the business, giving them the opportunity to find their own field and to establish themselves.”

“In a way, they have already had a share in the successes of the past,” he continues, “however now they have the chance to also explore new directions the Group can go in, and also go into new ventures. The Group is built on sound structures, which will certainly help them focus on new targets and not waste precious time building them. Obviously, new times bring the need for new targets and innovative ways of doing business – through digitalisation, for example – however I am confident that my children have the right frame of mind to face the challenges ahead.”

Read next: 6 things leaders can do this summer to rest, emotionally decompress and recharge