‘Pleasing and inspiring our clients is central to everything we do’ – CEO, Würth Ltd

Arthur Calleja heads local operations of the world’s leading retail group with the same principles set by its founder, Adolf Würth, in 1945. 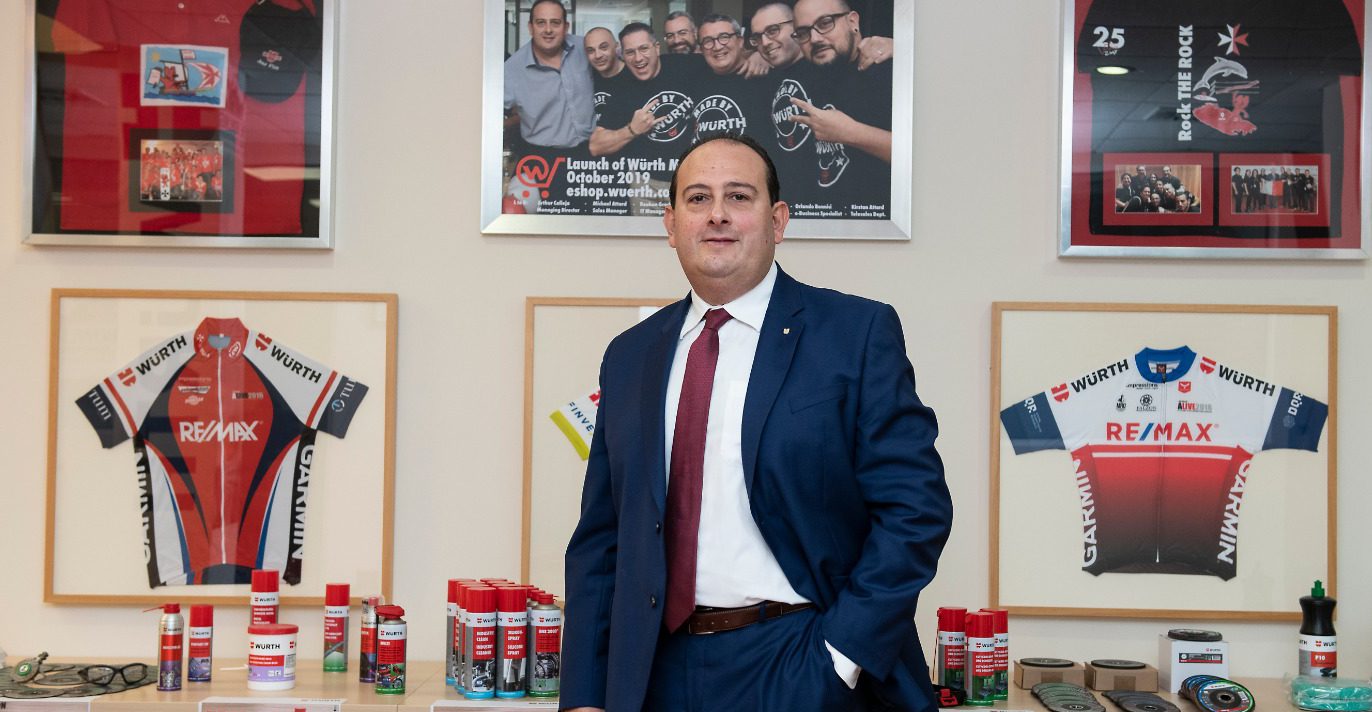 When Arthur Calleja was appointed CEO of Würth Ltd five years ago, there was one aspect of the job he planned to take more seriously than any other: safeguarding the jobs of the 70-plus people employed by the company, and hopefully creating even more. “Keeping our workforce in a job is my driving principle,” he begins.

Arthur explains that, as a German company in Malta, Würth has a particular attitude and approach to discipline. “Yes we adapt to Malta, but our DNA, our objectives and the way we think are primarily inspired by the German way of doing things. We have daily targets split into different divisions – from automotive and metal, to wood, construction, maritime and trade – and we aim to achieve each target by 9pm every day. Sales underpin absolutely everything that we do here; we love selling because it inspires our customers.”

Pausing to reflect for a moment, Arthur admits he never dreamt that he would be managing a sales-driven company. His forte at the Jesuit school where he was educated was maths, and he assumed he would work in accounting or a similar profession. As he progressed, he developed his statistical brain too, and this led him to his first role, at KPMG, where he also gained international experience, including in Switzerland and Ireland. “I loved the numbers game but realised I could also step outside that to specialise in management functions too,” he says.

This realisation led him to Würth in 2002, where he was appointed Finance Manager. It coincided with an important time for the company in Malta and, as Arthur worked his way up the ladder, he was also entrusted with the company’s sales function – leading to a 14-year stint as Sales Manager.

“I set the sales strategy for a number of years,” he continues. “In that time I helped grow the sales team from nine to 20, and opened our second shop. So, when the time came for a leadership change, I had proven myself and gained experience across the organisation. I was the choice to change question marks into exclamation marks, and was thrilled to be appointed CEO. I am in my fifth year now and, thankfully, it has worked out very well.”

Effectively leading his 70-strong team is critical to Arthur’s success. His own boss – Reinhold Würth, the now-Chairman and owner of the global enterprise – has written about his belief that 50 per cent of success depends on the management of your human resources. With this in mind, the local CEO places great importance on being there for his staff.

“I am extremely hands-on,” he says. “However I have learnt to delegate and to trust my management team. Overall, it’s communication that is most critical in all of this. Sometimes, as a team, it’s possible to speak the same language while not really understanding one another. Common goals and a clear vision are so important.”

It’s that vision that helps Arthur to stay focused in such a fast-paced environment, where he and his team help over 500 clients on a daily basis. “There are new opportunities and new challenges every day,” he says. “But I definitely feel part of the larger Würth family, and am in regular contact with other managing directors and CEOs from across the international group. So, although the responsibility is on my shoulders for Malta and Gozo, I have a ‘bigger brother’ that I can talk to and share with at any time. That has made all the difference.”

Relationships in general are crucial to Arthur and the wider Würth philosophy. Locally, the company has over 2,300 active ongoing customers, many of whom have been clients for over 10 years. “Pleasing and inspiring our clients is central to everything we do and is the very basis for our reputation,” the CEO stresses. “I think our success stems from the 10-year vision that every company within the Würth Group has to present and update annually – and which I have been submitting for the past 19 years. When you set a vision, you have a strong strategy.

The Würth founders knew that, so it’s carved into our way of doing things. We set milestones and make clear paths for the months and years to come. I truly believe it’s the only way that things can be achieved.”

That said, even with a very clear plan to follow for 2020, nothing could have prepared Arthur and his team for the crisis that hit in March. “As an international group with a strong base in Asia, we were getting plenty of information about what was happening there in January and February, so we knew what to expect. We were also able to look to our contacts in Italy and Spain to learn about how they were coping with things closer to home.

“On our end, things were balanced at that time. The pandemic hit certain sectors very harshly, such as the hospitality industry, with hotels needing far less maintenance this year. But then other parts of our business did extremely well, such as our shops, which were full of people who were doing up their homes. Yes it was tough to work out all the different scenarios at the start; and I did have some sleepless nights. But in the end it wasn’t as bad as I thought it would be and we have adapted and fared rather well.”

And with 2020 complete, Arthur is now putting his focus on digitalisation for 2021. “We’ve already made a great start, having launched our online shop at just the right time in 2019,” he says. “That really helped us last year! Now I see the opportunities that digitalisation could bring to our future too, and we have a month-by-month plan for the next few months.”

Finally, the CEO also details his plans for growth, despite the fact that he does foresee a few more bumps to ride out in the short term, not just locally but globally. “We will be growing our workforce by two or three people and innovating using new technology, but we will also stay focused on our bottom line.

One of the underpinning Würth beliefs is that ‘growth without profit is fatal, but profit without growth is fatal too’. So we’ll be keeping that in mind as we move forward – using our German principles, helping our people, and doing whatever it takes to keep growing Würth in Malta.”